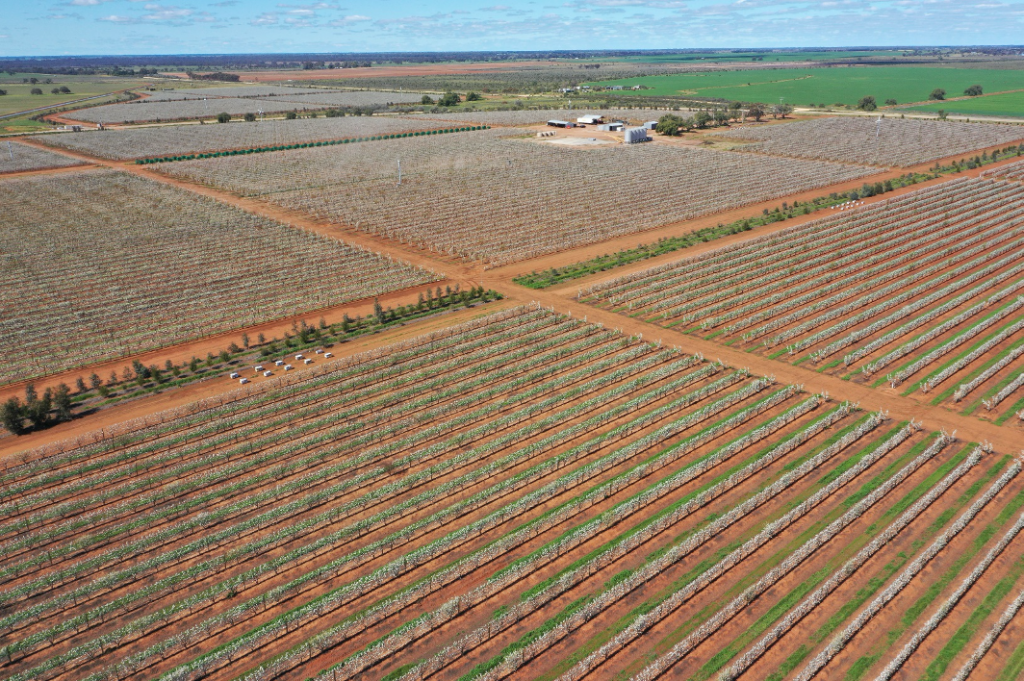 Our Queen Garnet Plums at Lake Charm, Northern Victoria, has welcomed in spring with a stunning display of blossom across the orchard.

With 42,000 trees planted over 50ha, the orchard has become a welcome home to 400 beehives for 30 days over flowering.

Since acquiring the site, Kilter Rural has transformed the landscape with a subsurface drip irrigation, a fully automated delivery system for water and liquid fertilisers. The expected harvest for FY21 is 1500 tonnes of fruit. This volume will see the harvest take place over 28 days in January.

The orchard provides 18 FTE jobs in Northern Victori, with further economic benefits for the local economy with the harvested fruit packed nearby in Lake Boga. The fruit will be sold throughout South East Asia and Australia from February through to June.

Last season, Kilter Rural was the largest exporter of Queen Garnet fresh produce into Asia for Nurtrafruit, the licence holder of the variety.

Kilter Rural manages the orchard on behalf of Aware Super.

What is a Queen Garnet Plum?

The Queen Garnet Plum was developed in Queensland for its taste and potential health benefits associated with being a dark fruit high in anthrocyanin.  The plum is now grown across all states of Australia servicing fruit markets around the country and has been described as a “superfood” due to its antioxidant content.

Anthocyanin is an antioxidant found in many naturally dark coloured fruits, such as blackcurrants, blueberries, and raspberries. It’s the pigment that gives the Queen Garnet its very dark purple flesh and skin.

What is the difference between Queen Garnet and other plum varieties?

The plum has an extremely long shelf life, meaning stored appropriately, it holds as great eating for much longer periods than an average bit of fruit. Similarly, it can handle a much longer hanging time on the tree before picking, while continuing to increase its antioxidant content.